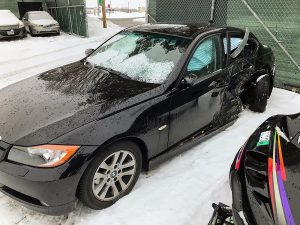 Hi. My name is Brenda. At the end of January 2020, I was in a car accident. I was driving a small BMW with two standard poodles in the back seat.

As I was turning south onto Hwy 61 from a side road, I was t-boned by a pickup truck that was heading north. It spun me around 180 degrees across 3 lanes and into the ditch on the west side of the highway. The car was totaled.

As you can see from the picture, had I been hit one second sooner, it would have hit the driver’s door.

And – thankfully – the driver side airbag deployed, protecting me from what could have been a very serious accident. That was God’s protection.

The first thing I realized was that I couldn’t breathe. Apparently, the airbag knocked the wind out of my lungs. And my middle back was hurting pretty badly.

The next thing I knew, the driver of the pickup was calling to me through the driver’s side door, asking if I was okay. Still stunned from the impact, I asked him if he was okay. I was so relieved to hear that he wasn’t injured.

While I was trying to assess the seriousness of my condition, another individual opened my passenger door to check on me, letting me know she had called 911. That’s when I remembered I had two poodles in the back seat! Turning around, I saw my poor sweet dogs were both okay but frightened to death (they were both shaking profusely).

This is where I really sensed God’s providential care for me. As I sat there in that car with two frightened dogs, it occurred to me that I was NOT going to be driving away from that accident. DUH! I searched for my cell phone to call my husband (who had gone to the church in Rush City to do some work – 30 miles away).

To my great relief, when he answered his phone he was sitting at the freeway exit only a couple of blocks away from where I had the accident. So he was my hero, coming to the rescue to handle all the details while I took an ambulance ride to the hospital. You’ll never convince me that wasn’t God’s perfect timing at work!

I am so thankful that God protected everyone (including pets) from any serious injury and that my husband was at the scene of the accident to relieve all my fears of handling the mess I was in. Praise you, Lord!

Hi – This is Pastor Lee and I would like to share a testimony of God’s Protection. On Friday night the 17th (or actually early Saturday morning about 1:00 am), there was a very powerful storm pass over our house. … END_OF_DOCUMENT_TOKEN_TO_BE_REPLACED

Hi. My name is Brenda. At the end of January 2020, I was in a car accident. I was driving a small BMW with two standard poodles in the back seat. As I was turning south onto Hwy 61 from … END_OF_DOCUMENT_TOKEN_TO_BE_REPLACED

Testimony to Give my Lord and Savior Jesus Christ Glory and Honor by Ron Scharmer, Sr. On April 9, 2020, I was outside trimming my Dogwood bushes when I felt pain in my chest. I thought I had pulled a … END_OF_DOCUMENT_TOKEN_TO_BE_REPLACED

About a month ago, I was dealing with a very painful shoulder. It had been bothering me for a couple of weeks and was gradually getting worse. It was hurting up into my neck on the left side and I … END_OF_DOCUMENT_TOKEN_TO_BE_REPLACED